How budget and CGI allowed Alfonso Cuarón to reinvent the filmgoing experience.

With Gravity, Alfonso Cuarón finds a perfect setting in which to utilize his love of sweeping camera movements and long takes. Harry Potter and the Prisoner of Azkaban (2004), with it’s otherworldly rules, gave Cuarón a chance to stretch his wings a bit. When Harry hops on his broomstick and hurdles into the air, you can tell the director is enjoying the freedom of green screen and budgeting that allow him to lift off the ground. In Children of Men (2006), Cuarón once again favored camera fluidity, emphasizing the vast amounts of rubbled space in a childless future. The technique also creates a feeling of continuous action, providing an alternative to the rapid editing techniques over-used in action films. Here, harnessing a jaw-dropping environment unlike any other, he lets his instincts run wild. END_OF_DOCUMENT_TOKEN_TO_BE_REPLACED

The devil is a woman

There is an odd feminist strain running through horror movies about the devil. These films aren’t just about the Beast encroaching on the (usually female) body, but often examine human systems as well. The evil forces oppressing the central woman’s physiognomy are paralleled with the traditionally patriarchal structures of western medicinal practices and religion. Not surprisingly, most of the films under discussion here were made during a time when a woman’s choices during pregnancy were limited, or when government control over her body was a not-too-distant memory. Rosemary’s Baby (Roman Polanksi, 1968) was released in a time when abortion was still illegal in most states. The Exorcist (William Friedkin, 1973) and Carrie (Brian De Palma, 1976) came out in the wake of the landmark Roe Vs. Wade case that legalized abortion in Jan. 1973. Even today, women are not safe from legislations that would determine what they can and cannot do when faced with an unwanted pregnancy. 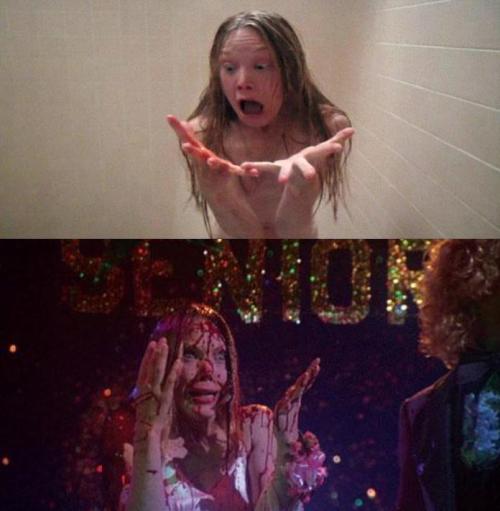